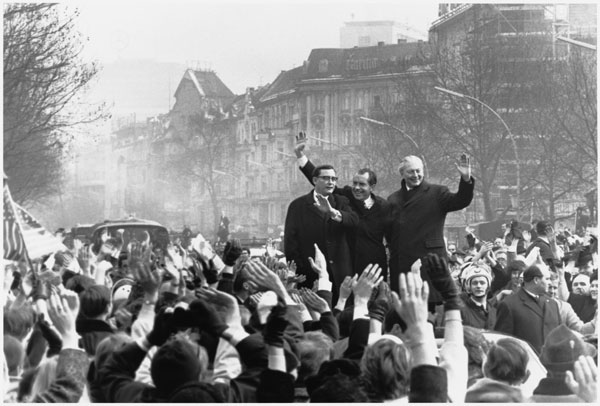 Mr. Mayor, Mr. Chancellor, Mr. Vice Chancellor, Mr. Secretary of State, distinguished guests, and all of those gathered here in this great, productive factory in Berlin:

I first apologize for the fact that we have kept you waiting. But as we came through the city the crowds were so large that we were unable to keep on our schedule.

So the reason we are here is a demonstration of the truth of what the Mayor has just said: that the people of Berlin are free and that despite a wall this is one city and one people and one nation. I saw many signs as we came through the streets of the city--some were in English, most were in German. The ones in German, of course, I could not understand. But there was one sign that was a combination that made me feel very much at home. It said "Ho Ha Hay, Nixon is okay."

I first came to this city 22 years ago. At that time most of those that I see here, or many of those, were not yet born. And to many who came here then, Berlin seemed to be a city without hope and without a future. But the pessimists at that period, over 20 years ago, did not know the people of Berlin.

There is no more remarkable story in human history than the creation of this island of freedom and prosperity, of courage and determination, in the center of postwar Europe.

If this is an age of symbols, one of the great symbols of the age is this city. And what you do here is done for free men everywhere throughout the world. You stand for a cause much bigger than yourselves and this is the greatest destiny that a man or a woman can have. Because your will to remain free strengthens the will to freedom of all men; your courage in the face of deliberate and constant challenge fortifies the courage of all those who love liberty.

The presence of an American President in Berlin, following a recent visit by a British Prime Minister, is another kind of symbol. It is a way of demonstrating unmistakably our long-standing commitment to the people of West Berlin. Let there be no miscalculation: No unilateral move, no illegal act, no form of pressure from any source will shake the resolve of the Western nations to defend their rightful status as protectors of the people of free Berlin.

All the world admires bravery. But there are different kinds of bravery. Bravery in a crisis is expected of those who love freedom; what is much more difficult, much more rare, is bravery day-by-day--the steady fortitude that resists remorseless pressure and refuses to permit the slow erosion of liberties.

That is the remarkable bravery of the Berliner, and it stands as a shining example to people everywhere throughout the world. The partnership between our two peoples was forged back in the dark days of the blockade when men like Lucius Clay and Ernst Reuter1 personified our determination to survive as free men. It is appropriate, 20 years after the end of that blockade, that we pay tribute to all who suffered for the ideal of freedom in those days of physical privation and spiritual triumph.

As I viewed the progress of this vital city today, I knew that that sacrifice was not in vain.

And to all the people of Berlin today, I bring this message from the heart of America: You have justified the support and the commitment of your friends and, as a result, no city in the world has more friends, or more devoted friends, than has the city of Berlin. The American responsibility here is derived from the most solemn international agreements. But what we have gone through together in those 24 years has given those agreements a special meaning.

Four Presidents before me have held to this principle and I tell you at this time and in this place that I, too, hold fast to this principle: Berlin must remain free. I do not say this in any spirit of bravado or belligerence. I am simply stating an irrevocable fact of international life.

Our commitment to the freedom of Berlin has never been more steady, never more firm than it is today. For more than a generation we have pledged American lives to an ideal and a reality: that Berlin shall be free and that Berlin shall live. For its part, Berlin has remained steadfast. So have we--and steadfast we shall stay. No one should doubt the determination of the United States to live up to its obligations. The question before the world is not whether we shall rise to the challenge of defending Berlin--we have already demonstrated that we shall.

The question now is how best to end the challenge and clear the way for a peaceful solution to the problem of a divided Germany. When we say that we reject any unilateral alteration of the status quo in Berlin, we do not mean that we consider the status quo to be satisfactory. Nobody benefits from a stalemate, least of all the people of Berlin. Let us set behind us the stereotype of Berlin as a "provocation." Let us, all of us, view the situation in Berlin as an invocation, a call to end the tension of the past age here and everywhere.

Our common attitude can best be expressed in a motto of Goethe: "Without haste, but without rest." That is how, step by step, we shall strive together to construct a durable peace.

There were times in the past when Berlin had to stand its ground in defiance of powerful forces that threatened to overwhelm it. Your determination in those times of danger demonstrated beyond the shadow of a doubt that threats and coercion could never succeed. By your fortitude, you have created conditions which may in time permit another kind of determination--a determination that we shall, by negotiation among governments and reconciliation among men, bring an end to the division of this city, this nation, this continent, and this planet. By your faith in the future you have inspired renewed faith in the hearts of all men.

The men of the past were trapped in the gray overcast of cold war; the men of the future, a future toward which we will all work, if only they remember the tragedy and triumph of Berlin, will be free to walk in the warm sunlight of a just peace.

Note: The President spoke at 1 p.m. at the Siemens Factory in West Berlin. An advance text of the President's remarks was also released by the White House Press Office. 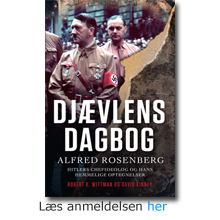 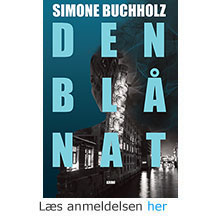 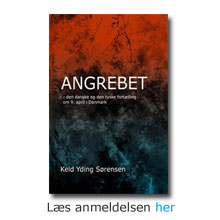